In his first press conference after the midterms, President Trump repeated his claim that he cannot release his tax returns even with Democrats controlling the House. Here’s why.

WASHINGTON – President Donald Trump’s effort to keep his personal and corporate  financial records away from congressional and law enforcement investigators comes before the Supreme Court Tuesday amid indications some justices may be reluctant to weigh in.

The dramatic oral arguments, to be conducted by telephone amid the coronavirus pandemic and broadcast live, could result in historic rulings on a president’s immunity from investigation while in office and Congress’ oversight powers, right in the middle of the 2020 presidential campaign.

Perhaps with an eye on the potential political repercussions, the court last month asked both sides fighting over congressional subpoenas to address whether the battle may be a “political question” beyond the reach of federal courts. If the justices so decide, they could avoid putting a thumb on the scale favoring the president or Congress.

“It’s an uncomfortable position for the court,” says Peter Shane, who teaches constitutional law at Ohio State University Moritz College of Law. “There’s nothing in it for the court to antagonize one of them if they don’t have to.”

Among the justices who might find that attractive are Chief Justice John Roberts, who seeks to keep the court out of politics when possible, and Trump’s two high court nominees, Associate Justices Neil Gorsuch and Brett Kavanaugh, who otherwise face the choice of protecting or opposing the president who nominated them. 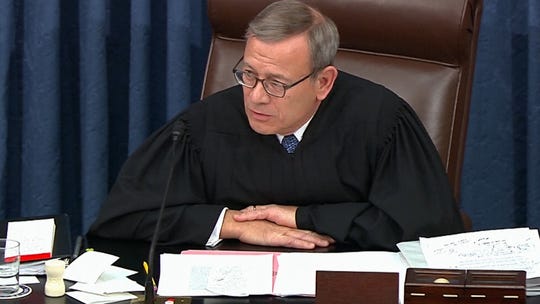 Roberts wrote the court’s 5-4 decision last summer that said disputes over partisan gerrymandering by state legislatures were “political questions beyond the reach of the federal courts.”

“In a novel political fight like this, the court might well look for ways both to extricate itself and to keep future fights like this out of the court system,” says Lawrence Joseph, an attorney who suggested that approach to the court on behalf of the conservative Eagle Forum Education & Legal Defense Fund.

But both sides in the current dispute urged the justices Friday to weigh in on the merits rather than invoke the “political question” doctrine.

“Judicial abstention here would not fence off the court from ‘a political tug-of-war,'” Trump’s lawyer William Consovoy wrote. “It would be writing every congressional committee a blank check to subpoena any personal records it wants from any president any time it wishes simply by seeking those records from a custodian with no incentive to draw the ire of Congress. That is constitutionally intolerable.”

“It is in the committees’ interest for this court to reach the merits now, rather than to let doubts as to the subpoenas’ validity linger,” House general counsel Douglas Letter agreed. “It is also in the interest of the executive branch for this court to reach the merits here. The courts should be available to provide the executive branch safeguards, should it ever need them.”

Risks for all three branches

It’s not clear whether punting the battle with Congress back to the executive and legislative branches would help or hurt Trump in the end. House Democrats are seeking banking and accounting records held by Mazars USA, Deutsche Bank and Capital One. In a stalemate between the White House and Congress, they could refuse to release them or hand them over.

The legal battles pit Trump against three House committees, controlled by Democrats, that have issued subpoenas for eight years of financial documents. A separate fight involves Manhattan District Attorney Cyrus Vance’s subpoena for similar documents as well as the tax returns that Trump, unlike recent predecessors, has not released voluntarily.

Lawmakers claim the records will help determine the need for future legislation in areas such as campaign finance law, bank loan practices, and efforts to prevent foreign influence in elections. Trump’s lawyers say it’s a fishing expedition to see if the president is guilty of tax fraud or money laundering. 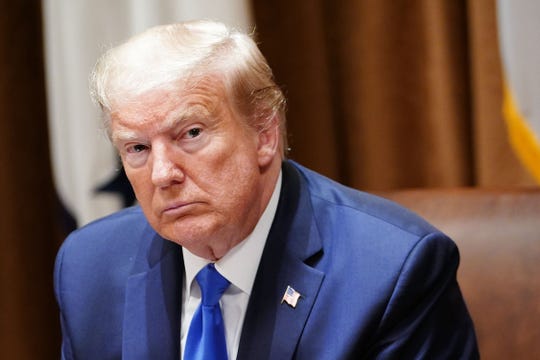 President Donald Trump looks on during a meeting with military leaders and his national security team in the Cabinet Room of the White House in Washington, D.C., on May 9, 2020. (Photo: MANDEL NGAN, AFP via Getty Images)

All three branches of government have much at stake:

• The political earthquake that some justices may be seeking to sidestep would be most acutely felt if the president loses and the documents are made public during his reelection campaign. For nearly five years since declaring his candidacy in 2015, Trump has managed to keep his tax returns and much of his financial data from prying eyes.

“Publicly releasing information about individuals is a form of punishment,” Trump’s lawyers argue in court papers. “Yet that has been the goal here from the start.”

• Congress has much at stake as well. Its oversight authority could be constrained by a ruling in Trump’s favor, setting a precedent for future investigations – particularly those viewed as partisan.

“In more than 20 cases concerning the scope of Congress’s power to investigate, this court has only once held that a congressional inquiry exceeded its constitutional limits,” House lawyers contend in defending the subpoenas.

• There also are high stakes facing the high court. If it sides with Trump along ideological lines – with five justices named by Republican presidents in the majority and four named by Democrats in dissent – it could emerge as damaged goods in the eyes of the public.

“If the president wins and it’s 5-4 … there will be people claiming that the president’s appointees have come to his defense,” says Saikrishna Prakash, a University of Virginia law professor whose recent book, The Living Presidency, warns of its ever-expanding powers.

The congressional subpoenas emanate from three House committees, rather than one or both houses of Congress – a potential shortcoming Trump’s lawyers have sought to impress upon the Supreme Court.

The House Committee on Oversight and Reform issued a subpoena to Mazars USA, Trump’s accounting firm, more than a year ago seeking financial records from the president, his family business, a trust and the company that runs Trump International Hotel in Washington, D.C. Thus far, two federal courts have upheld the subpoena.

Trump’s former personal lawyer, Michael Cohen, testified before Congress that as a private citizen, Trump routinely overstated or understated his holdings for financial gain. The panel wants to compare eight years of financial documents to Cohen’s testimony and government disclosures.

The House Financial Services Committee and the House Intelligence Committee issued subpoenas to Deutsche Bank and Capital One more than a year ago seeking records from Trump, his three oldest children and the Trump Organization. The panels are probing risky lending practices by major financial institutions and efforts by Russia to influence U.S. elections. They have been upheld twice in lower courts.

The House of Representatives’ general counsel, Douglas Letter, said the records are needed to help determine “whether senior government officials, including the president, are acting in the country’s best interest and not in their own financial interest.”

But Trump lawyer William Consovoy warned the justices that “given the obvious temptation to investigate the personal affairs of political rivals, subpoenas concerning the private lives of presidents will become routine in times of divided government.”

The Manhattan DA’s subpoenas came later as part of a criminal probe of hush-money payments that Cohen said were made to adult film star Stormy Daniels and former Playboy model Karen McDougal, who claimed they had affairs with Trump that he has denied. Once again, two lower courts upheld the subpoenas.

Trump’s lawyers have argued that the president has absolute immunity while in office from grand jury investigations of criminal conduct. During oral arguments before the U.S. Court of Appeals for the 2nd Circuit, they contended Trump could shoot someone on Fifth Avenue and escape prosecution until he leaves office.

“Local officials … cannot exercise their power to hinder the chief executive in the performance of the duties that he owes to the undivided nation,” they argue in court papers. “The risk that politics will lead state and local prosecutors to relentlessly harass the president is simply too great to tolerate.”

The legal battles are nothing new for Trump. As a New York-based real estate developer and reality TV star, he made it a practice to bring his personal and professional beefs to court. Since winning the White House, he has done the same thing on political and policy matters.

A USA TODAY analysis in 2016 of legal filings across the United States found that Trump and his businesses had been involved in at least 4,000 legal actions in federal and state courts over three decades, ranging from million-dollar real estate battles to personal defamation lawsuits.

Since his election, Trump has had better luck at the Supreme Court than the lower courts that have blocked many of his policies, particularly on immigration.

The administration has asked the justices for emergency stays of lower court actions 26 times in three-plus years, compared to eight times in the previous 16 years, according to University of Texas School of Law professor Stephen Vladeck. The court has complied in 15 of those cases, at least in part.

But in previous high-profile battles over documents or testimony, the Supreme Court ruled unanimously against Presidents Richard Nixon in 1974 and Bill Clinton in 1997, with their nominees in agreement. The decisions led eventually to Nixon’s resignation and Clinton’s impeachment.

That history raises the pressure on today’s high court, which Roberts has said should seek unanimity wherever possible.

“At a time we are so politicized and Trump is such a polarizing president, I hope that the court doesn’t come down 5-4 along partisan lines,” says Erwin Chemerinsky, dean of the University of California-Berkeley School of Law. “I do think the court’s credibility is on the line.”

Fauci to warn of ‘needless’ deaths if US opens too early